My late grandfather loved being surrounded by his children and grandchildren, and always attached a great deal of importance to family dinners. During the school holidays, my cousins, my brother and I used to spend weeks at our grandparents’ house. Naziha, my grandmother — a cordon bleu chef — enjoyed preparing tasty and spicy dishes, and would never forget to put khobz (bread) on the table.

“One of the greatest joys of my childhood as a Tunisian,” said Yosra, my older cousin, “was to grab a piece from the hot bread that dad or grandpa had just bought from the bakery, and eat it. It was so tasty and it smelled so good, that I remember myself eating a whole baguette, before getting home.”

Here’s a family account of Tunisian bread varieties from the perspective of a typical North-African extended family.

Since my youngest age, I remember eating bread with my cousins, in my grandparents’ house, whenever we were hungry. We would eat many pieces of bread, until we finish a whole baguette, before lunch.

Bread has always been an essential and valued part of the Tunisian diet. Tunisians have a variety of sauces like mouloukhiya, bean sauce or chakchouka, that they eat with bread. In fact, bread in Tunisia has a long history dating back over thousands of years. The cultivation of cereals allowed Tunisia, to become a major Mediterranean power, wealthy and prosperous, nicknamed “Rome’s bread basket” during the ancient times. The Tunisian people inherited and developed several varieties of bread since ancient times: tabouna, mlawi, khobz ghaney, khozb zitoun, khobz abraj. 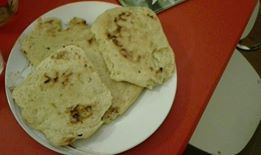 The special place of bread in Tunisians’ diet habits is due to economic factors especially poverty. In fact, before the Tunisian independence to the present day, very poor people who can’t buy meat or vegetables, just eat bread and harissa (a hot chili pepper paste).

In fact, my mother’s family was poor and my grandfather struggled to support his large family of six children. So, he always bought a large quantity of baguettes since bread is very cheap and subsidized by the Tunisian State. Besides, it is very substantial, filling and brings a feeling of fullness.

“When I was a child, I used to eat a lot of bread,” said Hayet, my mother, “because that was all what we had to eat, most of the times and it made me skip meals because I was satiate for hours.”

That’s why most of Tunisian mothers give their kids sandwiches as snacks so they won’t feel hungry and weak. During our childhood, my brother and I used to take two sandwiches to school, for breaks.

“At school, the greatest moment was break time,” said Moucharref, my younger chubby brother, “it was with joy and gluttony that I eat my cheese or tuna sandwich, lovingly prepared by my mother.”

Even adults, when a bit puckish, make harissa sandwiches to fill the between-meal gaps. The spicy harissa with bread is a good mixture to stave off hunger.

Tabouna is Tunisians’ favorite and most ancient bread. It’s my grandmother’s specialty, who wakes up at dawn to prepare Tabouna, for breakfast. Tabouna is a traditional bread baked along the walls of a traditional terracotta oven, itself called tabouna. Made from flour, this bread has a round shape, fairly flattened. Tabouna is mostly consumed in rural areas of Tunisia, however, during the holy month of Ramadan, most Tunisian people prefer tabouna to the French baguette. This traditional bread dates from the Carthaginian era and is proved by a terracotta (representing the tabouna oven) present at the Museum of Carthage. 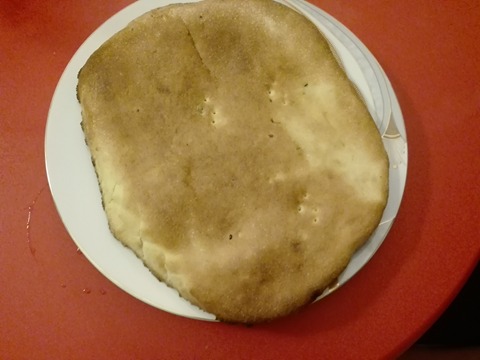 Tunisians eat straight tabouna with salads like salata mishwiyya (grilled salad) with tuna, with harissa or with grilled meat. Many traditional fast food restaurants use tabouna to make sandwiches, which are very popular among Tunisian people. Ilhem, my childhood friend who usually goes on long car trips with her family, to various Tunisian areas, always buys tabouna from sellers on the road.

“When I go on a trip with my family, we always buy tabouna whenever we’re hungry from sellers on the road,” said Ilhem. “It’s hot, delicious and very substantial.”

Mlawi is a delicious kind of crepe or galette, which can be found everywhere in Tunisia. It is a product prepared from fine semolina, flour, a lot of oil (olive or sunflower), warm water and salt. In each city, village or neighborhood, you can find many mlawi restaurants. This bread went viral among the Tunisian people, because it smells really good, has a fine texture and tastes wonderful (since it contains a lot of oil). People often eat hot mlawi from the oven, and spread it with harissa, cheese, tuna or merguez. In rural areas, Tunisians often eat mlawi with chakchouka. Besides, mlawi is students’ and young people’s favorite fast food.

“Every day, once classes are finished, we would always buy mlawi with harissa and tuna, and eat it on our way home.” said Yassine, my cousin. “It’s cheap and very delicious. There are generally long queues in mlawi restaurants, especially during the school year.” 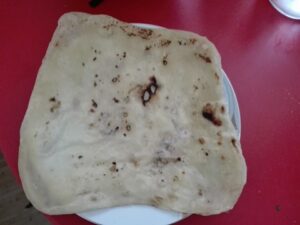 Khobz ghaney is one of the most ancient Tunisian breads and peasants’ favourite bread. My great-grandmother, a peasant woman, always used to cook khobz ghaney for her meals.

“My grandmother always cooked a single type of Tunisian bread: khobz ghaney,” said Hayet, my mother. “Actually, all peasants eat it along with chakchouka for their meals.”

Khobz ghaney is prepared with fine semolina, oil, salt, sugar, yeast and warm water. It is thick, smooth and very mellow. It is easily chewed and swallowed, which makes people eat lots of it, without noticing. khobz ghaney takes its name from the oven in which it is prepared, which is called ghaney. It’s a terracotta oven, and Tunisians usually put small stones at its bottom. Khobz ghaney has originated — and is most consumed — in rural areas. 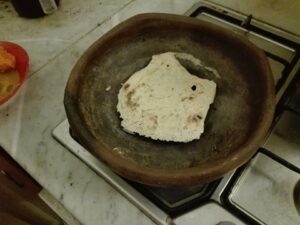 One of the most loved bread is khobz zitoun, “olive bread”. Khobz zitoun is made of basic bread ingredients and has a lot of olives (green and black), onion and dry herbs. These extra ingredients give it a rich and aromatic flavor. Generally, people eat khobz zitoun during the holy month of Ramadan because it wets the appetite along with salads.

My grandmother Naziha always recommends khobz zitoun. “Khobz zitoun _should always have its place on the table,” she says, “especially during Ramadan when we [Tunisians] most prepare a variety of salads. Kids love _khobz zitoun too and eat lots of it.”

From salty bread we move on to khobz abraj (also called harcha), which is sweet bread in the form of sandblasted galettes, prepared from medium semolina, water, olive oil, salt, butter and a lot of white sugar.

It is thick, very coarse and dry. This diamond-shaped bread is very appreciated by Tunisian people, who have it with black coffee or with milk. Some people, to make it sweeter, fill it with dates paste mixed with a pinch of cinnamon, of ground glove, some oil and jam. It is a very traditional bread which was much consumed before, then nowadays due to the advent of the refined pastry industry.

“In my childhood, abraj was my favorite sweet dish and dessert,” says Amel, my aunt, “since it was almost the only sweet thing to eat, back then.”

However, there is still a strong local bread culture. Tunisians still consume traditional bread, not only occasionally but some of them do it regularly because traditional bread is healthier than the French Baguette which contains lots of sugar, salt and can cause many diseases (such as diabetes, high blood pressure).