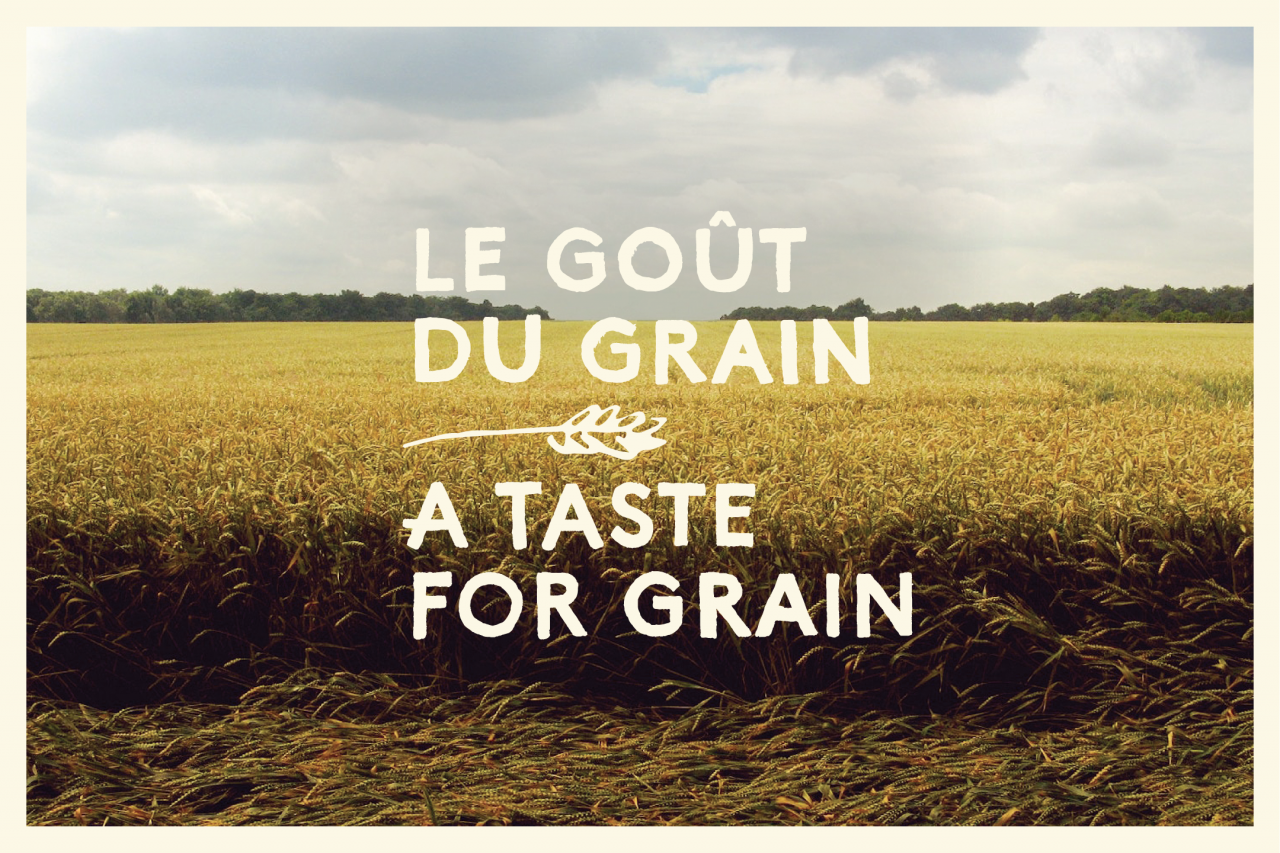 During my first day at A Taste for Grain, I’d started reflecting deeply about the role and importance that bread-making has in my life. The second day of the event focused more on professionals than on the general public. I was anticipating great talks about the future of the grain economy, and about the role of the farmer baker.

The new grain economy in California

Sarah Musgrave opened up the discussion with Mai Nguyen, the youngest grain grower in California. Inspired by Dave Miller”, Mai created a new grain economy that puts sustainability first, while acknowledging the need for sales. An approach that focuses only on sales has major, negative impacts. “One third of the carbon in the atmosphere results from agricultural activities,” Mai says.

In order to face the heavily subsidized economy of commodity grain, farmers have to reinvest in diversity. Mai became aware of the problem years ago when she opened up grain catalogs only to discover that very few varieties were offered. Knowing that there are more than 145,000 wheat varieties, she set herself on a mission to build “a collaborative effort to revive variety.” She decided to put all her efforts in the resilience of grain.

As a promoter of the California Grain Campaign, Mai aims at building accountability and sustainability in the grain economy. She’s also a promoter of the 20% by 2020 Campaign, whose goal is to make sure that, by 2020, vendors in farmers’ markets in California will use at least 20% of whole-grain ingredients. “We’re building agriculture and infrastructure that will carry us far into the future,” Mai says.

Nan Kohler, from Grist and Toll flour mill in Los Angeles, added that this kind of agriculture needs to be built “from the ground up.” For her, that meant building a milling culture in a city. Her major challenge was to build an economy of scale with just spoonfuls of grains, literally.

Rare and heritage seeds, however resilient or productive they can be, can easily take up to 7 years to yield an acceptable quantity of grain. “The industry has no reference point to help us,” Nan says.

Milling is a craft in and of itself. To differentiate itself from the mass market, millers such as Nan adopt stone-ground milling and whole wheat.

For such a small-scale mill business to be successful, Nan believes that it must give priority to grains and flours that are uncommon in the commodity market. That is, whole-grain and heritage wheat can offer an alternative. “We don’t win at a small scale if we reproduce what goes on at a larger scale,” Nan says.

Mai added that, “taking care of seeds is a long game, it doesn’t pay in the short term. No one is paying me to do that work—it’s essential! It’s a lineage, and it needs to be done.”

Everyone, from the farmer to the baker, including the miller and the customer, is engaged in investing in soil, grain, health and economy. “It’s risky being a visionary and a ground breaker. The point is that we should not compare what we do to a model that will be no more relevant in the future,” Nan says.

As we realize that we must invest in each other more than ever, we’re giving proper value to farmers and artists whose contributions have been underestimated. Mai says that the point is “to change a food system, and that it’s not about creating a niche.”

So, what’s the call-to-action?

Nan believes that, “we can take ownership in the process, through education and seeking out local relationships.”

Mai concludes, “It’s not about you personally, it’s a society that invests in what we care about, in people rather than in for-profit organizations.”

Roland Feuillas: building the world one seed at a time 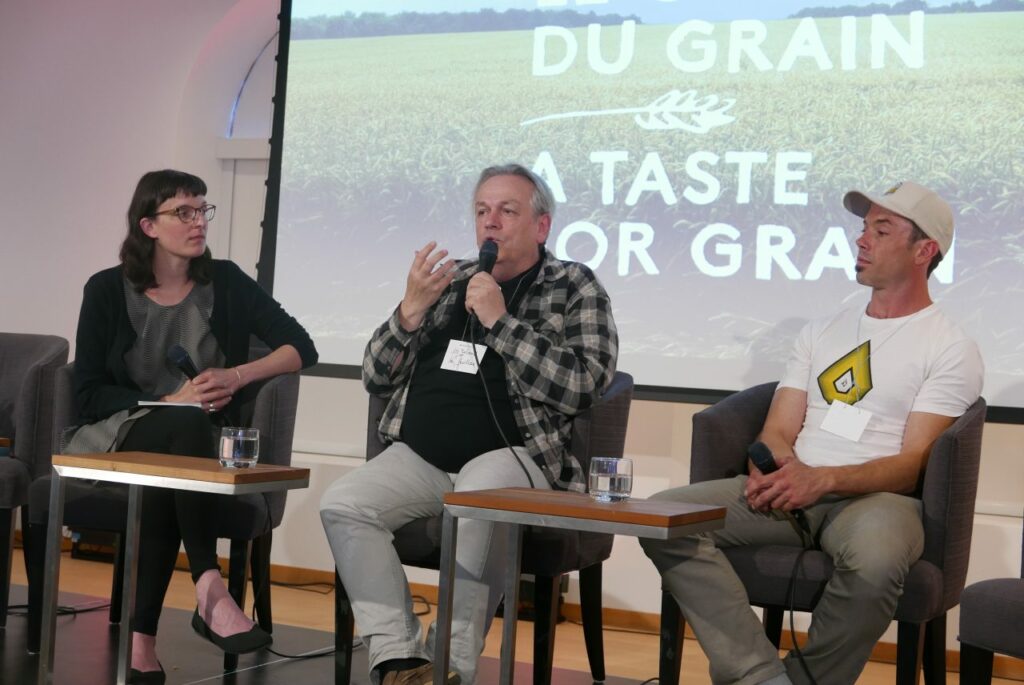 Roland Feuillas, from Les maitres de mon moulin (France), expressed deep feelings about the sacredness of Bread, written with a capital “B.” He restored a windmill that was originally built in 1211. From the mill to the oven, from the flour to the loaf of bread, from the wheat grains to the seeds, he is engaged fully and deeply in the revitalization of an earth-to-hearth connection. Roland believes that bakers should possess their own mills, to create breads that are made with 100% natural wheats.

“When seeds are modified, Roland says, we lose all the meaning. We become disconnected from the seed itself.”

Roland set on a journey to find country wheats (“blés de pays”) that have been preserved for generations by farmers in more or less isolated areas. These wheats have been taken care of in the traditional way, that is, they were sown and harvested. They thus have evolved and adapted to their environment, allowing the new seeds to be more resilient, and diversified internally.

Roland is a former software engineer who faced a major life crisis in his forties. He and his wife, Valérie, converted to baking, farming, and milling to preserve their sanity.

From his previous life in IT, Roland kept the principles of open source software close to his heart. He applied that model to seeds, by creating a catalog of heirloom seeds that farmers can exchange freely. Thanks to the efforts of engaged farmers, the law will allow such exchanges of heterogeneous seeds in the European Union by 2021.

As a pragmatic visionary, Roland supports a mindful marketing that promotes a product which values country farmers. “Customers pay for the seeds we use, Roland says. A circular economy is much needed.”

He created a digital hub where batches of grain are published, sold and bought directly by producers and artisans.

He’s an advocate of diversity. “We can apply to large-scale farming the principles of permaculture in which wheat never stands alone in a field. It’ll grow with chick peas, alfalfa, mustard, etc. That kind of polyculture yields less wheat, but it yields more grain overall and is thus more profitable,” Roland says.

Chefs and bakers show to the world what can be achieved with wheat, whether it’s grain or flour.

“They are like the ‘directors’ of a movie in which wheat has a major role. They create taste, not in any ‘magical’ or ‘illusionary’ ways. They give back meaning to the future. They offer people things that have their own taste, not things that have a taste which doesn’t belong to them,” Roland concludes.