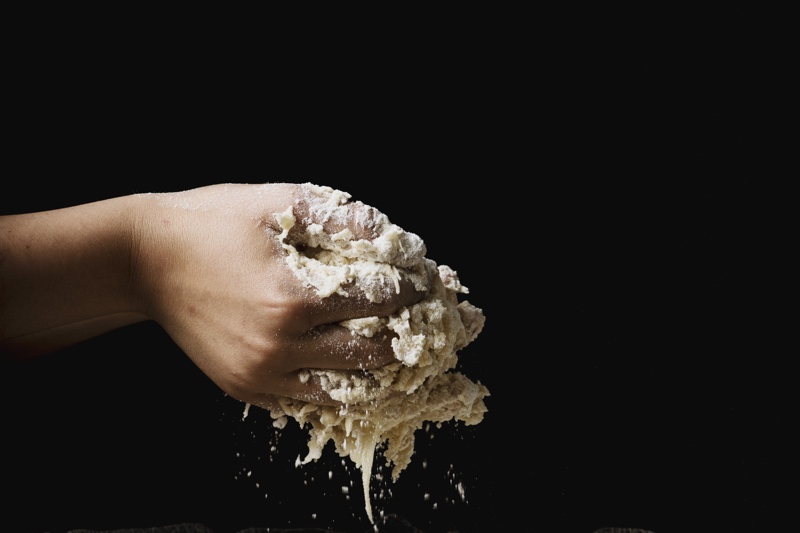 When you think about the process of bread making, one of the first things that come to mind is probably working the dough – or kneading, as it is commonly referred to. In this step, the ingredients get mixed evenly into a uniform mass we call the dough, but more importantly, kneading builds the gluten network that gives wheat bread its characteristic structure: the beautiful oven spring as well as all the air pockets in the bread’s crumb.

But what way of kneading produces the best results for the bread you are after – preferably with as little effort as possible?

To answer this question, I have collected a list of all of the most common ways to knead a bread dough along with instructions for the method as well as the pros and cons and ideas on when to apply them.

If your favorite method was left out, please tell about it in the comments so we can all benefit from it.

On the web, and also in some bread making books, there is a lot of confusing and contradictory information about why we knead the dough and what we are trying to achieve with the step. This is understandable: bread making is first a craft and only second, science. But even if the many different explanations based on common sense don’t necessarily lead to bad advice, it’s still good to have the basics right to better understand why something works while another method not so much…

The best (and most thorough) explanation I have yet seen for gluten forming is in Emily Buehler’s book, Bread Science (I recommend this one for everyone interested in understanding their bread on a deeper level – not just gluten but also fermentation, shaping, and so on).

When dough is mixed, the proteins in the flour combine with water to form longer chains, called gluten. Kneading the dough enables the gluten the form a network of chains and sheets. This network of gluten is strong and elastic.

The book continues with a lot more details and chemistry diagrams showing how gluten bonds form and align, but for our needs today, this is enough.

Now, let’s look at the different methods for achieving this.

This is the way I first learned to understand kneading: a random series of all kinds of squeezes and pushes – in other words fighting with the dough. When using this method, kneading is often done right there in the bowl where the ingredients were mixed.

Here’s me (or my hands) doing this with a very basic straight dough (500g bread flour, 350g water, and a little yeast and salt):

I’m sure you’ve seen or done something like that before. It’s not very efficient or elegant, but it sort of does the trick – as Tom Herbert writes in The Fabulous Baker Brothers:

Kneading is all about getting energy into dough to enhance its elasticity. It doesn’t matter that much how you do it.

I agree with this sentence about half-way: if you are just getting started with bread making, don’t let not knowing the “best” kneading technique become an obstacle that keeps you from baking. But once you are started, why not spend some time in trying out other, more efficient ways that are both easier and more respectful for the dough instead?

Remember: the goal in working the dough is to create strength into the dough by aligning the gluten network and making sure the flour and water are evenly distributed. And there are other, more effective ways to do it that are both gentler and more appreciative to the dough and easier and more enjoyable for you.

This one is a big leap forward if you compare it to the first method of kneading dough. Now, instead of randomly attacking the dough, you are doing a series of deliberate moves or actions meant to build strength into the dough.

Keep repeating these steps until the dough feels smooth and elastic. Usually, that will happen at around 10 minutes. If the dough rips and feels really tight, leave it aside for a few minutes so that it can relax a little bit. Then continue.

As you see in the video, this method is very good for stiff doughs that don’t stick to your work surface. But when you add more water into dough (I know you want to!), it gets sticky and messy. Which is where the next method comes in handy!

This method, practiced by French bakers for centuries, was made famous to the larger audience by Richard Bertinet when he published his first bread making book, Dough.

Just like the method above, this method – often referred to as the “French fold”, “slap and fold”, or even “the Bertinet method” – is based on stretching the dough and then folding it over itself – the difference is that now, we take advantage of the dough’s stickiness.

This is why the method only works with doughs with a somewhat higher hydration. Again, here are my hands, and a small example:

This is the method I use most of the time I make bread – assuming I knead the dough, which is what we will be talking about next: kneading, or working the dough, isn’t always necessary.

It’s true: You can get better results with less work. All you need is time.

In bread making, time is a miraculous thing, and as Ken Forkish says in Flour Water Salt Yeast, you should treat it as your fifth ingredient:

Recognizing time as a discrete and crucial element in a recipe is the first detail that sets the best bakers apart.

This is true at pretty much every step of the baking process but when it comes to working the dough, the power of time shows itself in the form of the autolyse. Right at them moment when you mix the flour and water, water gets to work, hydrating the gluten forming proteins present in the flour, which then start forming bonds and thus creating gluten. Give them some time and you’ll notice that you need very little – if any – actual kneading to create a smooth and elastic dough.

When you work your dough at step 3 using any of the methods one to three, you will notice that the dough is very smooth and elastic right from the beginning. After just a few minutes, the dough is ready for the next step.

If you take this idea a bit further, you can reduce the kneading time all the way to zero…

This is a variation of the “Time” (or autolyse as it is officially known as) method above presented by Dan Lepard in his book, The Handmade Loaf.

Basically, instead of doing a long autolyse as the first step in your bread making process, you do it in intervals, kneading for just 5 to 15 seconds always followed by a ten minute rest period.

Each time you knead the dough, it should be a conscious and deliberate act rather than a frantic aerobic activity.

A similar method can be used with longer fermenting doughs where you have a lot of time at your disposal: After the first 30 minute autolyse, mix in the remaining ingredients, then keep folding the dough gently every half an hour or so, until the dough is ready to be shaped. Notice that the folds should get gentler as time passes so that you preserve as much as possible of the gases that have developed in the dough in the fermentation.

If you have a mixer, you might want to make it do the kneading for you. I don’t have one and have never used or felt the need to use one in bread making so I’m not the right person to advice on this.

That said, as a general rule of thumb, when mixing with a machine, be careful to not over knead the dough. And also, make use of the time: there is no reason for not to doing an autolyse with a KitchenAid.

Looking at the methods above, you will notice that most of them are simply variations of stretching the dough. As the goal is to align the gluten network, that makes a lot of sense. Therefore, any technique that includes stretching and then folding will work: taking the dough in your hands and stretching it in the air is one example that comes to mind.

But in general, my advice is to let time do as much of the work for you as possible and then pick a method that lets you handle the dough with respect. The French fold method combined with a long autolyse (or some “interval training”) is a very good all-purpose tool to start with.