I’m sure we’ve all heard people without celiac disease tell us “I can’t eat bread!” or “Gluten makes me feel sick.” And as lovers and makers of bread, we’ve had a hard time choosing a proper response. Unable to accept that our favorite foodstuff could be to blame, we have asked ourselves if the issue could be in their heads instead…

Now, however, evidence showing that the symptoms are real and gluten really does have something to do with them is piling up. But as often is, the question isn’t as straightforward as whether one should avoid wheat and gluten or not.

For Barbara ‘Elisi’ Caracciolo, the question of gluten intolerance is personal. Having been a bread lover since her childhood in Rome, when she found she got symptoms from gluten, she felt confused.

What was she to do?

“I began experiencing severe reactions to food containing wheat or related cereals (such as barley, rye, spelt). Fermenting some of the wheat with sourdough helped, but only to a certain point,” she says.

“The fact that I had problems tolerating even organic and sourdough fermented bread fueled my curiosity. It pushed my search for answers—and solutions.”

But she wasn’t ready to give up bread. And as a medical scientist, she knew issues related to health were never quite as black and white as we in the general public see them. This unique combination of a deep love for bread, a scientist’s background, and gluten sensitivity has given Barbara a balanced understanding of the big gluten question. While a lot of people fall in one of two camps: anti-gluten or not believing in the condition at all, Barbara has taken a scientist’s point of view.

“The fact that I had problems tolerating even organic and sourdough fermented bread fueled my curiosity. It pushed my search for answers—and solutions.”

Now, although the work still continues, Barbara has found some answers. And as a next step, in Stockholm, she is about to open a health and eco conscious store and mill, Mother Grain, that aims at making heirloom grain varieties more available and accessible to her community both near and far.

I asked Barbara a few questions about gluten sensitivity, what we know about it, and what a good response to the epidemic would be from bakers and bread lovers.

If you are curious to learn more, Barbara’s in-depth article about the current understanding on gluten sensitivity was published in Bread Magazine issue 19.

Jarkko: What prompted you to study gluten sensitivity?

Barbara: It all started because of my own issues with gluten. I was baking intensively – in the spare time of my medical research job – when I first observed I had reactions to wheat and related cereals.

I did not want to eliminate gluten from my diet without first understanding what was going on with me and with other people in my situation. I was also hoping to find solutions, and I think I have found a few.

Jarkko: What are some of the most common misconceptions about gluten sensitivity?

Barbara: They are so many… And what contributes to making a misconception circulate is the existence of two opposite sides. Adhering to any of these sides is likely to prevent a lucid approach to the phenomenon.

“We humans really don’t know how to deal with differences, even when it comes to something apparently “neutral” as the individual reaction to gluten.”

On one side, there are the people who never experienced gluten sensitivity and who are fans of wheat and related cereals. This group, which I actually belonged to, tends to think that gluten sensitivity is mainly due to social contagion nourished by industrial interests in selling gluten-free products.

On the complete opposite side, there are those who interpret the growing number of people complaining about gluten sensitivity as a proof that wheat and related cereals are intrinsically bad for us and that we should just massively stop eating them.

I have witnessed contempt and haste from both sides, each showing a close-minded attitude towards other people points of view. You see, we humans really don’t know how to deal with differences, even when it comes to something apparently “neutral” as the individual reaction to gluten.

Jarkko: How far would you say the science today is in understanding the condition and its causes?

Barbara: We just started. There are so many studies that still need to be done and then redone several times and by different groups, to ensure that results are unbiased. I have a list of studies I would like to see published, it is my own personal Santa Claus list. But there have been some good studies already, which show us insightful pieces of this puzzle. I reviewed them in the article, with references.

Jarkko: In your article, you point out that gluten sensitivity was virtually unknown until a couple of decades ago. What has changed?

Barbara: Of course, awareness of the condition is one reason why this phenomenon came so abruptly, but I don’t think it’s just that. Many may have experienced problems with wheat for years but come to give a name to these problems only when non-celiac gluten sensitivity became known.

My own personal experience has taught me that sensitization can also happen all of a sudden, after a lifetime without problems with wheat. As I found out, I am perfectly representative of a wider phenomenon.

Jarkko: And why most cases are seen at early middle age?

Barbara: I think it’s because, by that age, cases with a more mixed genetic profile had the time to become sensitized to wheat and related cereals. This shows how something in the environment is likely to precipitate the autoimmune cascade of gluten sensitivity.

Studies that have compared blood samples of people seen in the late 70’s and then again 20 years later, showed double as much cases of celiac disease. It is reasonable to think that celiac disease and non-celiac disease are on a continuum and the rise in non-celiac cases is much higher, because pre-clinical conditions tend to be more frequent than their more severe equivalent.

Jarkko: But then when do you think the change started and what is the cause?

Barbara: It makes sense to believe that the biggest changes occurred during the last 30-40 years, as it takes time for a phenomenon to be noticed.

Reasons are probably multiple. In my opinion increased consumption of processed food starting in the ‘70s, made out of low-quality ingredients and “improved” with an impressive number of new compounds arrived on the market without in-depth and long-term studies on humans, is one of the precipitating factors. Among the processed food, also industrially processed bread.

Also in the ‘70s, came the recommendation to eat less saturated fat and that was read as “eat less animal based food and more cereals”, confirmed by the later published food pyramid, which put cereals at its base. So there is probably a dose-response effect.

Another aspect that also needs more investigation is how changes in wheat may have contributed to this mass sensitization. As I found out, crops that have been engineered to be more resistant to pest and climate may be the best for productivity, and for their baking properties. These crops, however, may not be the most digestible for us.

Jarkko: What do you think we, as bakers and bread lovers, can do to help the gluten sensitive among us while keeping the craft and art of bread alive?

Barbara: Good question. As usual, I think the best is to avoid divisions and rather work on a differentiation of the offered range of breads sold, or given away–in the case of hobby bakers.

“It is important to remember that this is not a war between gluten fans and the gluten sensitive.”

There should be a wide range of breads offered: from the breads with common flours, to those made out of heirloom wheat varieties, some of which are more digestible to non-celiac gluten sensitive people like me. And not to forget to also learn to make bread out of naturally gluten-free grains. This would be a great alternative to the highly processed gluten-free breads on the market. Helping people to reduce their intake of processed food is, in fact, a good idea, considering that processed food is most likely part of the problem.

It is important to remember that this is not a war between gluten fans and the gluten sensitive. We should all work together to keep treasuring our grains and keep making the best bread we can. And so we, bread people, could be an example for more difficult to solve problems in the world.

For the full article about gluten sensitivity, check out the Summer 2016 issue of Bread Magazine. 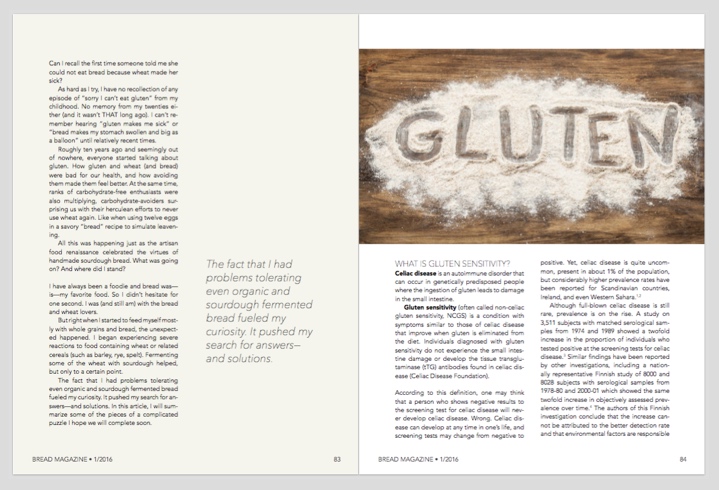 Also, if you have any questions or personal experiences to share, we’d love to hear them.

Barbara is hoping to raise conversation and promote a healthy dialog about gluten instead of the usual arguments. This could be a good place to start.